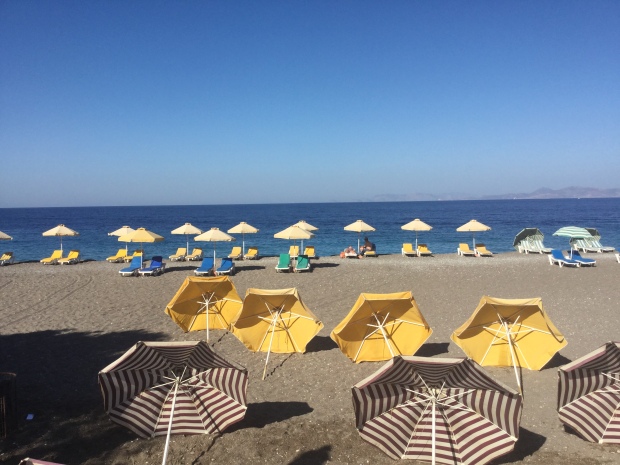 The Greek holiday island of Rhodes has thrown up another stunner. Apparently it is sunny here 300 days of the year.

Greece rugby league head coach Steve Georgallis is sitting at the officials table at Karakonero Stadium while the Rhodes 8s tournament is being contested. Teams involved are from Athens, Patra, Rhodes, Turkey and Australia. The team of Greek Australians will eventually win the final against Turkey.

‘Georgie’ has taken on the role of timekeeper, scoreboard attendant, results scribe and any other vacant job that needs to be managed on the sidelines at a rugby league tournament.

His Dad Leo, who emigrated to Sydney from the island of Tilos in 1959, is at the back of the grandstand taking it all in. More than once he brings his son a cup of coffee to keep him going.

In between games a number of people stroll over to say yasou and chat to the affable coach.

“This is what I love,” says Georgallis with a broad grin. “This is rugby league in its purest form. It not about money and status. Just camaraderie and a shared love for the game.

“When I came into first grade in the late 1980s in Sydney everyone was a part-time professional and had other jobs. Georgallis was a PE teacher and it is clear he looks back on those times with fondness and nostalgia.

“In those days all the players knew each other and you would play it tough on the field but then have a beer with the opposition after the game. That doesn’t happen anymore.”

While on official duties, the astute coach is also identifying players with his assistant Jim Pizanias for the squad of nineteen to play an international match against Turkey the following night.

Georgallis has been coach of the Greek team since 2002.

Starting out playing with teams of all heritage players selected mainly from competitions in Australia, rugby league in Greece evolved to having its own domestic competition in 2013.

While there has been a recent split with two leagues operating, there is strong optimism for this competition. It is overseen by the Rugby League European Federation (RLEF) who have been assisting with coaching and officials development

“I can see a real improvement in the local players since I was here a couple of years ago and that is a credit to the work of the volunteers in this country.

“No one gets paid a cent here. The Australians came over on the back of fundraising nights and the local Greek players paid their own airfares to Rhodes.

“This weekend is only possible due to the generosity of the local municipal council here who are providing accommodation and transport.”

When the squad of 19 is chosen on Saturday morning 12 players from the Greek domestic competition are in the side.

“If a couple of these kids here in Greece were transported to Australia and placed in junior development systems I know they would become top line players.

“We picked a kid from an Athens club, the Attica Rhinos who has been playing the game for less than 6 months and now he is playing for his country!”

The theme of the pre-game dressing room speech from the coach was pride in your country. The chests of the players visibly swell as the words cut through the nervous silence.

The first half of the game is full of niggle and aggression as you would expect with the history of these two proud countries. A brawl breaks out and a Turkish player is sent from the field leaving Turkey to battle it out with 12 men on the pitch.

At halftime up 26-0 the usually laid back and friendly Georgallis becomes stern and agitated. Discipline, don’t get involved with niggling tactics and respect the referee was the gist of his tirade.

The team responds by focussing on playing good entertaining rugby league and runs out winners 86-0.

The only Australian based Turkish player is dummy half Effem Coskun who plays with the Bankstown Giants in the police competition. “I was in Turkey for a 2 week holiday and they contacted me about going to Rhodes. I thought this sounds fun but when I was out there and I heard the anthems it really hit me that I was playing for my country.”

The weekend of rugby league finishes on Sunday with the first game of the 2016-17 Greek domestic season between the Rhodes Knights and Patras Panthers who have switched from rugby union this season. Patras are decked out in Panthers playing gear that Georgallis was able to secure for them as Penrith’s 2016 NSW Cup coach.

Patras go down 56-0 to last years premiers Rhodes but Georgie says they have plenty of potential. “With the right leadership and guidance they can be a strong team.”

At the end of the weekend Georgallis who is staying on a bit longer comes out to the airport to have a final drink and say goodbye. Not because it is his duty. It is obvious he just loves being around the players.

“My dad came out to Australia from Greece when he was 18 and made a life there. I am doing this to pay him back, pay Greece back and to pay rugby league back.

“See that young kid there from Attica Rhinos? He hasn’t had the Greek team polo shirt off his back since we gave it to him. That’s what I love about rugby league!” 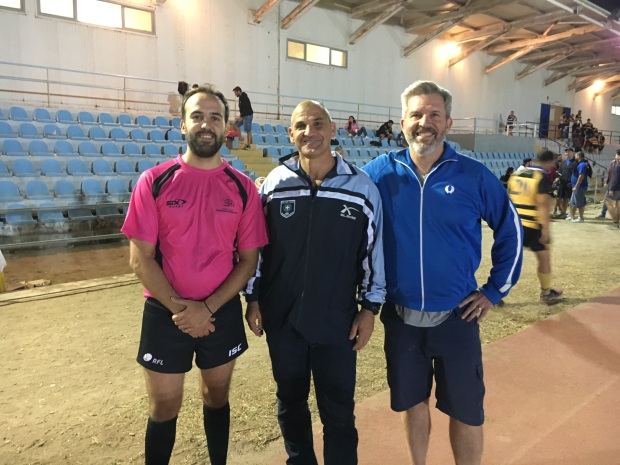